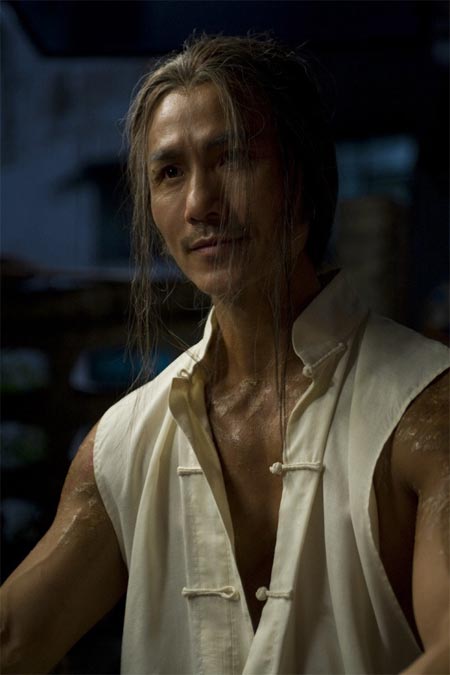 So Crazyandy and I had our rematch at last. What a set. We must’ve played 30-40 games? It was so even; I’d win a game, Crazyandy would take the next, I’d go on a two-three game winning streak, he would do the same. Good times.

The focus of the match kept changing. The first few games, he was jumping a lot, and who’d win would mostly depend whether I could anti-air consistently. Then in the middle of the set he was playing almost entirely footsies with a healthy corner game against me. And then suddenly he would do wall dives and go back to jumping that would catch me for big damage…it was a very fluid, changing set.

My fireball game was quite ineffective at the start. I now realise that the fireball and anti-air game are so tightly linked. If you do not put the fear of being dped into your opponent, you lose that split second of hesitation to jump in that allows you to put some pressure down with fireballs. The two things go in hand. So maybe sometimes I would beat myself up about my fireball game, but I should be questioning my anti-air instead.

Obviously Gen has the crazy jump and crossup, and I was spending a chunk of time in training room just practising my autocorrect DP against that crossup, but I don’t think I executed a single one today.

Crazyandy started out sparse with his crossups on knockdown, and I just chose to block them, but as he upped his crossup quotient in the later games, I should’ve dped that at least a few times.

Some of my bad fireball habits were still there today. Often when Crazyandy would land an blockstring, perhaps ended with a move that pushed me back (but was still safe) like hands, a lot of times I would fireball the instant the space between us opened up. This was all the opening he needed to jump in and beat me up. He was razor-sharp on his jumps earlier on, jumping every unsafe fireball I put out. And because Gen’s jump covers so much ground, technically the “safe fireball zone” in which you can always DP when the opponent jumps on reaction to a fireball, is much further than usual, is almost full screen distance away.

I started consciously telling myself to stop doing those fireballs, and I caught a few habitual jumps later on in the set. But I have to seriously get rid of this knee-jerk fireball reaction.

The other bad thing going in is that I was blocking almost every jump in during footsies. He would do a string, cut it off, and jump over me for the crossup, rinse and repeat. This would happen like three of four times in a row. Sure, I blocked most of the crossups, but I play Ryu! I have a DP, and I shouldn’t have to take that shit. I need to DP every close to mid-range jump in, not just jumps over my fireballs.

One thing that I did have more success with was breaking his focus. Recently, I realised that a lot of my opponents recognise that I don’t use ex fireballs, and try to catch me a lot with focus attacks through either my cmk or my fireballs. I realised that last night when playing Juntz- aBelle’s Sakura. So I am force feeding a lot more forward fierce during footsies into my game, and it seemed to work against Crazyandy initially. I got a lot of free big damage off forward fiercing his attempted FAs. He started adapting too, and relied less on the FA to get in.

One thing that he did well was to recognise my panic buttons and punish me. He would put me in the corner, and pressure me, recognising that I hit cmk a lot under duress. He would counter hit with his pokes, and get a lot of damage on me that way. Overall, I would say Crazyandy played better footsies than me. He used this poke that I’m not used to seeing from him a lot, perhaps a crouching roundhouse? I probably could have punished with sweep. I need to go to the lab on that.

But I am pleased that some of the things I specifically worked on in training mode bore fruit. I punished every ex rolling attack with DP, and was quick to punish wall dives on block with DP. I even got an LP DP to super to KO on one of his wall dives. Sometimes however, he would hit really low on the dive, and my DP wouldn’t hit. How do I recognise this faster? I would also say that I did a better job of blocking crossup wall dives this time than the last time I played him. I could still be better though, he still hit me with a couple dives to super+ultra.

On knockdown, I got the most success from crossup tatsus early in the set. I got a lot of comebacks through crossup tatsu super. He was blocked almost everything else, crossup lk/mks, fake crossups, and jumping lks to tick. Only after he started worrying about the super did I start to hit some fake crossups, which I would then combo into Ultra.

I also had trouble getting option selects to work here. When I jumped in, and option selected sweep, most of the time he would block. And when I tried to approach from the ground with tick throws and meaties, he did a good job of mixing up his ex waterfall kick and backdashes to keep me guessing, and not letting me get momentum. I guess he realised I wanted him to do stuff when I jump in, either backdash or reversal would’ve been free damage for me.

One thing that I caught him a lot with was that when I had him on the ground, and without meter, a lot of times I baited out his ultra with a safe jump. I got hit once or twice thinking my jump was a crossup when it didn’t and ended up blocking the wrong way! But I eventually wised up and took a couple of rounds off him that way. (I hate Ultras that zoom so far away from your character during the flash like JURI’S! I can’t see my character, and sometimes I end up blocking the wrong way when I do ambiguous safe jumps.)

One thing I wasn’t happy about is that I still don’t punish ex waterfall kick as heavily as I’d like. The timing of when he comes down is so wonky and inconsistent!

One thing I’m not proud of, is that I initially wanted to practice my cmp+lp+lk option select crouch tech, and I did use it a lot, but as the set went on, I panicked and mashed dp quite a lot when I was blocking. I’m sorry to say I got him a few times, but crazyandy told me later it might be a legitimate strategy to throw your opponent’s offense off by having that element of random DP sometimes.

I still feel that overusing it is a bad habit, and one that I thought I had kicked already, but I guess crazyandy brings out the worst in me! I feel that I should almost never do it without two bars, and I should get better at fadcing mashed dps too.

After the match we had a bit of a PSN discussion. Crazyandy brought up a good point; Gen relies on reading his opponent’s offense to get in (particularly when vsing Ryu), and if I play safe and simple, it actually makes it hard for him to mount an offense. When I’m spewing fireballs like crazy, he has license to jump in all day.
He brought up an interesting point about fighting Kazzee too, which I’m not sure I comprehend fully and I hope crazyandy comes and clarifies.

He said that despite Kazzee having infinitely better footsies than me, my Ryu seemed to have more answer for his Gen. Perhaps owing to my more safe (and hopefully) solid style. He said that when two players with two layers of footsies going on like him and Kazzee, the match becomes too complicated, and that maybe sometimes it’s better to stick to a couple of simple things to be doing in that fight, and adapt to the player instead of continually trying to play I counter you-you counter me footsies. Hm. Interesting!

Anyway, what an awesome Gen you have, Mr Crazyandy, and hope to play you more in the future!