I really wanted to go to the Evil Ryu/Oni Akuma-only 2 v 2 tournament at Box Hill today, but I could not make it… because I had to make my missus a lasagna. Oh well.

But I did get to finally try out Evil Ryu today at Bluehouse! 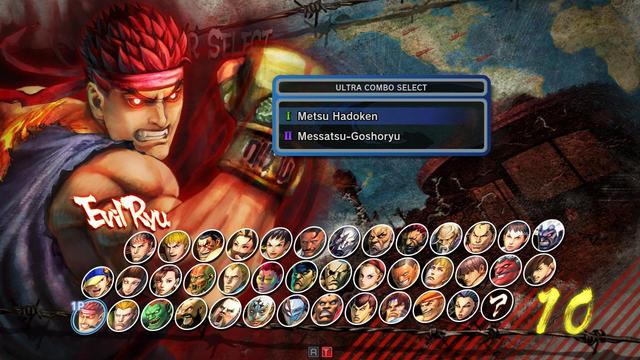 I showed up just past noon with my buddy Pedro. Sat down, plunked in my two bucks and selected Evil Ryu.

I feel pretty excited; he looks really cool on the select screen and there are already a bunch of people playing him and Oni Akuma in the arcade.

He moves a lot differently from Ryu. His back and forward dashes are definitely different, and I wonder about his walk speed. He’s also taller than normal Ryu, which makes me wonder if his hitbox is fatter as well.

No matter. I’m up against an E. Honda player that I don’t recognise.

I immediately feel a bit lost in the matchup. I keep hit confirming into low forward and sweep automatically, which obviously doesn’t work with Evil Ryu and the Honda player punishes me every time. Without the means or know how to set up a safe jump on Honda, I feel a little lost on offense. I notice Evil Ryu has Akuma’s far standing fierce and his HP DP feels really good. He’s definitely no slouch in the anti-air department.

His low forward seems quite good at first try. It cancels into fireball and other specials pretty smoothly, and I find myself really appreciating the range. It’s the Third Strike low forward, and looks really cool in the SF4 engine. It feels a bit slower than normal Ryu’s low forward though. Despite that, it still feels pretty good to me and the range makes me miss my old low forward from Super!

I didn’t get to use his low strong that much, which is apparently really good and his main combo building block.

I definitely feel a bit weird playing Evil Ryu; I think an Akuma player would immediately feel more at home performing his BnBs like Lk Tatsu into SRK etc.

I fail an SRK FADC Ultra 1 but land an anti-air lp dp in Ultra 1 in the corner. I notice that Evil Ryu’s forward dash is very different; and wonder if the Adon FADC problem of dashing too far under the opponent and messing up the player’s directional inputs will occur.

After playing him, here are my two cents:

I will probably stick with Ryu.

Evil Ryu combo-wise feels more like Akuma than Ryu. He does more damage with his BnBs than Ryu, similar to Akuma. But he doesn’t have the full option of dive kick vortex options like palm, demon flip grab and such.

So if I wanted Akuma-like damage, why don’t I just play Akuma instead?

He does have what seems like a 3-frame DP into Ultra AND a teleport. I tried the teleport, and while definitely useful, it seems a little less good than Akuma’s teleport.

His hop kick is really good. Possibly a Dudley like high/low mixup game in the future?

He doesn’t seem as complete a character as Ryu or Akuma. He lacks the combos into sweep or low forward blockstrings of Ryu and the easy tatsu into sweep of Akuma. Maybe that’s just me not being used to the character yet.

His crossup tatsu knocks people away, and since my Super is a Demon, I can’t get crossup tatsu into Super or into sweep like Akuma would.

So he seems an uneven mix of the best and worst of Ryu and Akuma.

While definitely very fun, and definitely different enough from normal Ryu to be his own character (which is a very good thing), I think for me he’ll just be a fun character to play on the side. I don’t think he’s broken or anything.

Of course with everything I say I fully expect to eat my own words when someone out there manages to break the game with Evil Ryu.

So I eventually ended up playing normal Ryu at Bluehouse. And got owned by…everybody.

I was losing to Blankas, Hondas, and even Somniac’s Oni Akuma!

Somniac showed up and we played a bit. He hit me with that crossup dash punch into Ultra!

I was having problems dealing with Oni’s fireball game. I couldn’t tell when it would do multiple hits and go through my fireball.

His DP is funny. It seems slow when it hits, but I tested Ryu’s sweep into safe jump on Oni and he was able to DP me. It could be an execution error, and I should probably test it more, but for now I assume that it’s a 3 frame DP.

But his air dash does seem very intriguing and he also seems very fun. That’s a good thing in my book and I hope the Vampire twins will pique even more interest in AE.

Debator even showed up and tore me a new one with Cody. Debator is a former Melbourne Ryu player and he quit the game a while back. Which made me a little sad because I need a Ryu mentor!

But it looks like he’s getting back into the game; just not with Ryu. I asked him why and he looked at me and shook his head. “Ryu sucks in this game,” was his death sentence. Looks like I gotta find another Ryu teacher… I’m looking at you Kilok!

I really didn’t know how to deal with his Cody; he was constantly in my face, frame trapping the hell out of me. It seems that a lot of Cody’s normals move him forward; so he is able to maintain the pressure much longer than Ryu would, for instance. I kept getting hit with random Bingos and Ruffian kicks as well. Overall I just felt really mindfucked playing his Cody!

It was an expensive day for me. Somniac eventually switched to Bison, and I lost game after game at the arcade.

I went home into a deep funk and didn’t do much better online.

Maybe I was having a bad day. But I think I just need to get a lot better. A lot of random people in the arcade were blowing through my zoning and footsies very easily, even though they couldn’t do normal combos. I’m really starting to feel my lack of fundamentals (through my wallet) as I play more and more in the arcades.

Spoony always tells me that I shouldn’t be losing to random semi-scrubby people in arcades because he doesn’t. But I think that I can only compete with certain players who seem “at my level” simply because I play against them a lot. When you put Spoony and me against the same stranger in an arcade, I do much, much worse than him and get revealed for the fraud that I am. Then my lack of fundamentals and adaptation skill really becomes apparent.

I guess that’s what arcades are for; to improve this aspect of my game. I only hope my wallet can hold up in the meantime!