Before I left for Queensland to attend Buttonsmash 2014, I asked Chad D’Cruze from Dusty Cartridge if there was any DC staff in Queensland I should look out for or perhaps contact. He initially said no… but then corrected himself and said that there was one particularly fervent DC supporter out there in Queensland by the name of Dejan, and that he was a big supporter of the DC podcast in particular. “Oh,” I replied- saying that I would try to keep an eye out for him. And then I promptly forgot about the whole thing.

I was filming some B-roll footage on Buttonsmash Sunday during the top 8 when Berzerk aka Daniel Chlebowczyk came over to me and pointed this guy with a Fatal Fury cap that said “GCF” on it. He told me that the guy’s name was Dejan and that he was the main organiser of the Gold Coast scene, and that I should go over and interview him.

Now at the time I was stressing over the meagre remaining SD card storage I had left- knowing I had to save some space to interview Falco, Baxter and Colonov, while still recording any exciting/hype crowd reactions or player popoffs during the top 8. So I told Daniel that I’d probably have to pass on interviewing Dejan. Daniel gave me an arch look and said “Well, you’re missing out on a golden opportunity. After all, how much footage do you really have to shoot of people playing?”

Initially, I was rather miffed at his comment, because I actually do require a good amount of B-roll footage and general player footage from the event for the composition of the Community videos, and so I resolutely told Daniel that I wouldn’t do it.

And I went on shooting the top 8, but started thinking to myself. If this dude is organising the Gold Coast scene (and I was aware that a Honda player from the Gold Coast had beat perhaps the top AE player in Queensland- Norman), then he probably has a good story to tell. And isn’t the whole purpose of the Community videos to shine more light on these hard-working, unheralded TOs? I mulled it over, and decided I was probably being too mule-headed.

I went over and grabbed Dejan, and shot the interview during the top 8. In the end I was glad I did because he had a wonderful story to tell about the Gold Coast scene, and after the shot, he started asking me if these videos were for Dusty Cartridge. I said yes, and then he started going on about how big a fan he was of DC, and then it finally clicked in my thick skull that this Dejan was the Dejan that Chad was talking about! I told Dejan what Chad had told me, and how glad I was to run into him. If Berzerk hadn’t pointed him out, this fortuitous encounter probably wouldn’t have happened!

So I’m happy how it turned out, and glad that I didn’t make a big mistake. Later on, I walked past Berzerk and told him that I shot Dejan, and that he was right, and I was wrong.

Thank you for sitting down with me Dejan, and I hope you guys like this episode. 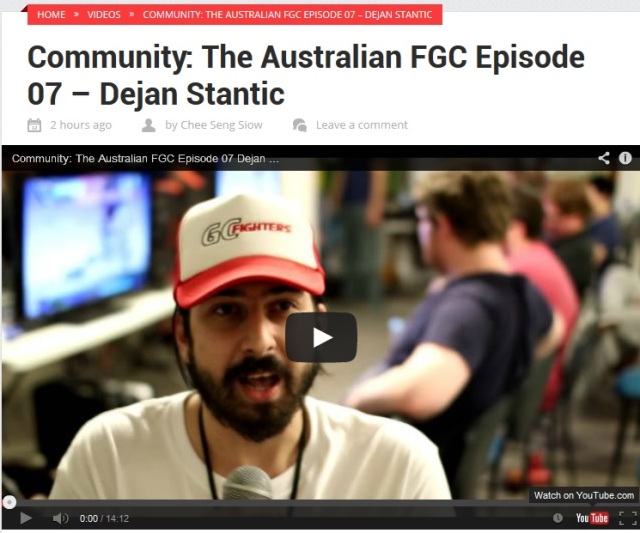 P.S. (Because I finally remembered that I should probably plug BAM6 being so close to the date)

Please come to BAM6 if you’re able- we at Couchwarriors are working pretty hard to make this a good one, and I would love to meet and shake your hand.

Yes you the  , I mean FGC newcomer.