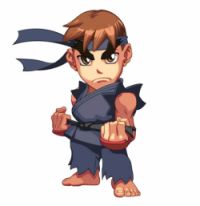 With BAM coming up I really haven’t had much time to practice at all, being mostly busy with BAM organizational stuff. With the limited time that I do have though, I’ve been working on fixing specific flaws in my Ryu execution. Because most of Ryu’s combos involve cancelling into special moves from crouching normals, I haven’t really had an opportunity to develop 100% consistency cancelling into specials from standing normals.

While this might not seem like a big deal, well I want to have 100% execution with my character. And that means getting into training mode and ironing out my inconsistencies.

So I’ve been working on Ryu’s universal-works-on-every-character max damage FADC solar plexus combo: fHP, close standing MK, fireball FADC, sHP, DP. And I’m becoming much more consistent with it, which is great. Sometimes in tournament I go for the solar plexus, csMK link instead of cHP as it’s a 2 frame link instead of a 1 frame link, and it’s only ten damage less. It’s much easier to hit the link, and minimizes the risk of whiffing a DP and getting punished with big damage. In general close standing MK is a great normal, it only does ten less damage than crouching fierce, and as it pushes Ryu forward you can combo a standing fierce (ten more damage than crouch fierce) after a fireball FADC which you wouldn’t be able to do on most characters..

I also previously have had difficulties doing sHP into DP on the 1P side, I kept getting unwanted solar plexuses. So it’s good to iron that out.

The other combo I was working on was fHP cmp stmp tatsu. This works on the skinny characters e.g. shotos, Balrog, and it does 308 damage which is only ten damage less than fHP, cHP, DP’s 318 damage. What you get for that ten damage is the corner carry of the tatsu, which in my eyes definitely makes it worth it, and you get two normals to verify that you’ve hit the link before you do the special move, whereas with the fHP cHP DP combo you almost always whiff the DP once you screw up the cHP link.

In my opinion the fHP cMP sMP tatsu combo should become the BnB fHP combo for Ryu on all the skinny characters that the fHP cMP cHP tatsu or the fHP cMPcMPcMK tatsu combos don’t work on. The only downside of that combo of course, is that it doesn’t hit on crouching opponents. Stand MP is another underused normal, it also does 80 damage, but it is a one frame link from a cMP though.

And lastly, we have the cMP cMP sMP DP combo. I first saw Daigo do this vs. a Cammy player, and I was pretty buttered. A new combo for me to practice!

So I went home and practiced it, it does 296 damage and 420 stun which is pretty damn good damage from a 4 frame low strong. (278 damage for a cMP cHP DP, for comparison) You can punish Cammy’s whiffed spiral arrow with that, or combo off a jump in (360 damage 570 stun). You can compare the damage of the jump in combo (to do when you stun Cammy) to fHP cMP cHP tatsu (316 damage 420 stun, 336 with additional DP hit in the corner) or Focus attack level 3 fHP cMP cHP Tatsu (376 570 damage). So I think the jump in combo is definitely worth doing over the FA combo if she has been stunned from multiple hits. (FA scales your combo a further 20%).

The sad thing though is that this combo only works on Cammy 😦 I tested it out on the whole cast.

Weirdly enough it actually works on T Hawk and Gief as well, but I discovered a weird glitch. If I hold forward with Gief or T Hawk before Ryu starts hitting me, the combo whiffs! If I do nothing, the combo hits as per normal. On Cammy it works regardless. Because of the iffyness of the combo on Gief and T Hawk, I decided to restrict the combo on Cammy only.

However! I discovered that fHP cMP sMP DP does 336 damage and 420 stun! Compared to Ryu’s other optimal fHP combo, the fHP cMP cHP tatsu combo(316 damage 420 stun) and you can see how I might be excited. (Only fHP combo that does more damage is fHP cMP cHP DP for 344 damage but only works on Yun and Yang.)

I tested it on the whole cast and so far it works on:  Honda, Makoto, Dudley, Cammy, Gouken, Dee Jay, Blanka, Vega, T Hawk, Gief, Juri (the DP doesn’t hit deep though)