I was on the fence about going to OHN this year. Things at home have been really shit, and it’s been hard to find the leave and money- I’ve been to every Australian major this year including EVO!

But in the end I was really glad I went. The attendance was smaller than in years past but that’s okay, it was much more relaxed and intimate and I feel like I got to know everyone there a bit better and just hang out with dudes.

NSW locals like Youssef, Xavier, David (Furyblitz), Sam and Soo-han really made me welcome and took the time to take me places to eat and chill. Youssef drove Xavier and I from the airport, opened up his house to us, and took us to El-Jannah garlic chicken. David brought me to that godlike Ramen place Ippudo Ramen. (For comparison’s sake, Hakata Gensuke in Melbourne is of similar quality, but at $24 for “extras” such as egg and chasiu, Ippudo blows it outta the water by having like five pieces of chasiu and toppings at that price.) Soo-han was another dude I really enjoyed hanging out with; really enjoyed his pure love for the community and Street Fighter- listening to his OG stories from back in the day was a real treat.

This is why I came to Sydney. Fuck the tournament.

I stayed with Xavier, Igor, Alex C from Melbourne, and Jason (Mr Chowda/WorstBalroginAU) from WA). We had a good time, but man.

Alex and Xavier are the ultimate combination.

Alex loves to talk conspiracy theories and Xavier loves to troll and prove people wrong. Every night I would come back to the room really late after having a bite or hanging out and they would be talking about all sorts of shit- gender salary, diet, the world is coming to end etc at 3AM! I would just groan and turn around and cover my ears with my pillow and try to sleep. But it was great fun.

I got to try the famous OHN Karaoke Night with Youssef, the Tekken boys (Tekken was hella hype at OHN this year) and the QLDers.

Baxter, Xavier and Youssef singing Shania Twain’s Man I feel like a Woman. And Ramee scratching his balls.

Baxter always makes me laugh, Falco/Hari/Tyrone and Reece are so chill, and I got to ask Yang his advice on how to snare a white woman as an Asian man…just seeing everyone again was great.

I didn’t really harbour any expectations in doing well in the tournament, but I still did extremely well by my standards. I have no illusions about my current mediocre ability in Street Fighter, so to place 9th in both Marvel and Ultra was very surprising. I brought my camera along for the trip, as I wanted to film a ton of B-roll footage for my Kyokugen and Youssef interview, so I also barely played any casuals at all.

KOF guys asked me to take a group photo. Ironically I don’t know how to take photos on my camera, just video cos I am a scrub. Jaunty ended up taking this.

For Ultra I think I played pretty good, especially with the likes of Xavier (Somniac) coaching me, but I was just a total fraud in Marvel.

Everyone in Melbourne knows my Magneto is utter trash. I got 3-0ed by Spikey first round, and I don’t think I even landed a hit. I think Hari and Baxter were standing behind me watching and they got so disgusted at my trash Magnus they wandered off halfway. That guy Spikey beat Tyrone after dispatching me, so he was pretty good. I eventually fought my way back to fight him again in the top 8 qualifying match, but I lost narrowly 3-2.

Ninth place! Not bad for basically a Two and a Half Men team!

I had two extremely fraudulent matches- against Nat and Tri from Queensland, two players that are undoubtedly better than me in this game.

Against Nat my Magneto was simply there to get hit and build meter for my Doom/Ammy and I got it up to 2-2. He started snapping in my Ammy, and in the last game it was down to Nova vs my Doom. He hit my Doom with a hard knockdown and I started yelling out “I’m gonna mash throw on wakeup!!!” And I did and grabbed him- he immediately facepalmed.

I was laughing so hard I dropped the Doom combo, but because he was still facepalming I just grabbed him again! For the KO. Ah, such fraudulence.

Against Tri I somehow went up 2-0 with my Magneto meatshield Doom/Ammy team, and then he started doing the usual Zero May Cry stuff and took the next two games easily. He also snapped in my Ammy and killed my two best characters, leaving me with only my trash Magneto.

Now I have never used Magneto in X-factor in my life before, and everyone knows I can’t complete a Magneto combo to save my life.

But in X-factor I don’t have to do any complex combos; to drop down air dash whiff S and land that H into Hypergrav. I just hit him and went into HHHHS GRAVITY SQUEEZE! And I did that three times and came back on all three characters with my Magneto!

I couldn’t believe it- I sat there staring at my stick for a long time. I shook his hand, and we were both shaking our heads… If only Tri knew the improbability of what just happened!

In Ultra, I played pretty good, beating In4war twice and Jaunty who was doing pretty well in casuals against me the night before. Two instances that made me realise that I was playing well on the day (for my standards); Jaunty was in the corner and jumped back to catch me moving in, and I DPed him on reaction- I almost never do that. And the other instance was when I invested a lot of life and meter to push him into the corner. He suddenly jumped over my head with a surprise crossup that I didn’t see coming until the very last second.

Now this is a typical Muttons moment when I throw it all away and eat the crossup and get put in the corner and lose my composure and the entire match.

But somehow I autocorrect DPed at the very last second and went on to take the game. When I DPed the crossup I was hella surprised at myself that I didn’t crack at that crucial moment. A lot has to be said for Xavier’s coaching, he really settled me down.

For example in my next match against Genxa (after I got completely and utterly demolished by Robsux), I won game 1, and then Genxa steamrolled me two quick rounds for game 2 in typical dominating Yun fashion. Usually I will sit there and overthink, letting my failures and mistakes haunt me for the next game. Xavier was sitting there saying “Don’t worry about it, forget about it, it’s done, move on to the next game. That’s fine.” And surprisingly enough, I did and won the next game. Thanks Xavier. Also thanks Spoony and all the guys that gave me silent support from behind. I can feel the love.

Against Genxa, before the match I was typically pessimistic. ZG was calling out before OHN that I would make it out of the pools and beat Henry but I didn’t believe it in the slightest. First off, historically I have been really bad against Yun in tournament or divekick characters for that matter. Secondly, Henry has beaten me multiple times in tournament- with ease, I might add.

Regardless, I  still labbed for the Yun matchup despite my feelings. I watched Infiltration vs Fentamu and thought about how you must be mobile with Ryu to confuse his divekick angles and to show Yun no respect- you cannot allow him to establish a rhythm or to feel comfortable. You have to jump RH him out of neutral jumps, you have to make reads and DP, you cannot allow him to do whatever he wants.

So I tried that and I really played with a lot of disrespect against Henry. I DPed a lot, and did a lot of unsafe shit like jump over empty jump DP FADC Ultra, and cmk EX fireball dash up DP to chip for the win (he could have easily jabbed me out of my dash and killed me.) It made him respect me and play more on the ground, to play Street Fighter, and I can win that way. In Melbourne people know I’m ass and refuse to get conditioned by any disrespect I show. But it worked, at least for one match!

Next up I had to play Stoz and I felt more confident- after all I play Xavier’s Bison all the time. But in the end even though I was playing ok at the start, my play degenerated over time. Yuto plays more defensive in the matchup than Xavier. Xavier knows he is superior to me as a player and will walk forward to engage with me in footsies at times. Yuto simply got the lead and sat there with charge, intimidating me with EX scissors range. I tried to bait stuff out and build meter, but I lost every single test of patience, eventually throwing that stupid fireball and he would EX scissors without fail, taking me down for the count.

Later after the match I talked to Jason about it, and we both agreed I should have walked forward more. Even though that range is scary for Ryu as it is within light scissors range I can just simply walk forward block to gain position, perhaps throw closer range fireballs, maybe briefly fish for focus to catch the 2nd hit of LK scissors, anything would be better than my dogged “stay out of EX scissors range” strategy that fell apart over time. Also, I really sucked against headstomps in that match. I feel like it’s a harder matchup now in Ultra, but I’m determined to work on that matchup a bit more now, to see what I can do if the Bison just sits there when he has the lead.

Next posts: League of Sharpies with Cactus, Tomcat (Or how Yun got his comeuppance), and interviews with Youssef and Kyokugen! 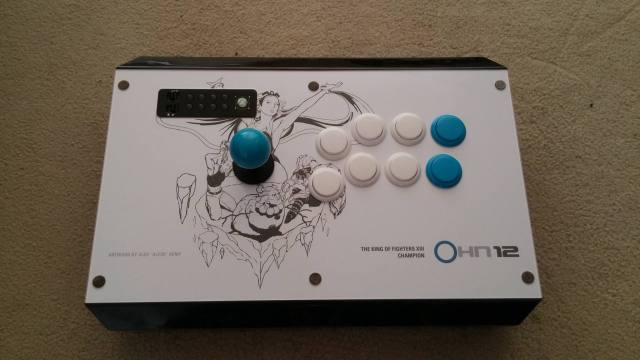 Check out this sick stick art by AlexK. Picture by Colin Tan aka Colinov

2 Responses to My brief OHN12 Recap